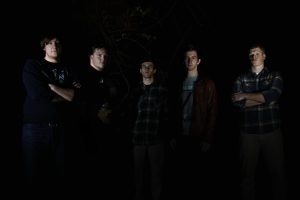 I’ve been playing in metal bands sine I was in 9th grade. People don’t usually believe me until I whip out the video evidence. Don’t worry, we’ll get there.

It started out small. 5 high schoolers, one who was homeschooled and had an affinity for audio engineering, in the basement with a couple shoddy instruments and weeks in a row with no Friday night plans. A couple of us had just picked up our instruments for the first time only a month or two before – we were just in it for the fun.

It turned out to be really, really fun. We started getting a bit more serious – we booked a couple small shows, we recorded our first song in the same basement we practiced in and we put it on the internet – and we actually got some people to pay attention.

We became obsessed with the band. We would have song writing sessions after school and practice every weekend. We started recording more and playing as many shows as we possibly could. We took everything that came our way – battles of the bands, high school talent shows, DIY firehall setups. As we played more, we got more attention, until we got the chance to open for some bigger bands and play the venues we grew up going to.


Most of us moved away to start college in 2010, so work on the band got sidelined mainly for school breaks. We were steadily working towards our ultimate goal: getting a full-length album out. Once we did it, we felt like the sky would be the limit – we would set up a huge album release show, try to tour, the whole nine yards. But for the meantime, we only had a couple of singles out, and we needed something that would put us on the map. So, we shamelessly followed the metal trend of the day – do a pop cover. We knew that no one would really pay attention unless we had a video to go along, though, so we put our collective talent to work and made it happen.  People seemed to like it.


2014 was upon us and time wasn’t on our side. We all graduated college, some of us moved away, our album got shelved before completion. We had been best friends for the past 5 years and loved our band more than most other things, but for some of us it was time to move on. We never officially “broke up,” but there was no plan to move things forward.

Until 2017. Some of us had scattered to other parts of the country, but 3 of us were still in Baltimore and we couldn’t stand leaving something that was so much a part of us unfinished. We rededicated ourselves to getting the album out, finally. Not too many people were paying attention at this point – we knew that we had let our moment pass – but we took a year to get ourselves back on track.

Back from the dead. October 11th. Debut album. Finally.

On October 11th of 2018, it finally came out. Sadly, we haven’t made any moves since, and the buzz that we generated around the online metal community in the wake of the album’s release has largely subsided. But now our story as friends and bandmates feels like it has finally come full circle. Interested in the updated sound? Give it a listen:


Liked what you heard? Why not buy it then? Please and thank you: