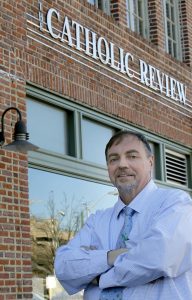 For many in today’s society, the Catholic Church could best be described with two words – old school.

When some people think of Catholicism, they think of tradition, ceremony, and conservative social values, chalking the institution up as one that needs to get with the times. If you ask Catholic journalists, however, the Church is doing exactly that – following the signs of the times – and they are trying to help.

Catholics in the United States, particularly millennial Catholics, are leaving the Church at an increasing rate, and more and more people than ever before have no religious affiliation whatsoever. As such, Catholic journalists recognize the growing importance of reporting good news, or as they say, the ‘Good News’ – the gospel teachings of the Church – and making them accessible to a wider audience.

Christopher Gunty has been doing just that – reporting the ‘Good News’ – since 1981. He has served as managing editor for three separate Catholic publications, including the Catholic Sun, a newspaper in Phoenix, Arizona that he founded in 1985. Currently, he serves as Associate Publisher and Editor at the Catholic Review, the official publication of the Archdiocese of Baltimore.

“Our job is to make sure that we provide a perspective that is authentically Catholic and look at issues that have an impact on people of the Catholic faith in a way that they’re not going to find anywhere else,” explains Gunty. “We bring an expertise that other journalists cannot.”

From immigration to tax reform, the Church sexual abuse crisis to the goings on of local parishes, Catholic publications aim to bring readers the news of the day, both secular and religous, through that lens of faith. For Gunty, it’s not just about informing readers about what is happening in the Church, but also about helping people understand what the faith may be calling people to do about hot button issues.

With nearly 40 years of journalism experience, Gunty could arguably be considered an old-school reporter. Further, the Catholic Review is at its heart an old-school publication – a monthly magazine hand-delivered to the reader’s doorstep. Yet, Gunty has always had some new tricks up his sleeves that have helped his publications grow.

During the 18-year span of Gunty’s leadership at the Catholic Sun in Phoenix, the paper grew from about 85,000 subscriptions to over 116,000. How did he manage to do it? Growing with the times.

“Part of it is adapting new technologies and following through on that – figuring out what works and what doesn’t,” he explains. Typewriter to computer, print to digital – with each industry advance, they advanced right with it.

However, as Gunty also describes, the rise in readership his paper saw in Phoenix largely arced upwards together with a rise in participation at local congregations. As more people filled the pews on Sunday mornings, they understandably also took more interest in that uniquely Catholic perspective on the issues of the day.

So, what happens to Catholic journalism when the numbers start skewing in the other direction?

According to a report from the Pew Research Center, U.S. adult Catholics have fallen out of their religion at a higher rate than followers of any other religion in the country. The report specifies that for every new convert to the faith, the Church has lost about 6.5. Further, additional Pew Research Center findings show that younger adults, particularly millennials, are reporting no religious affiliation whatsoever in far greater numbers than their older counterparts.

Despite the changing landscape, there might not be a need for divine intervention quite yet, as certain Catholic journalists are pivoting away from old school approaches for more creative ways to reach audiences.

Brian Strassburger, editor-in-chief of the Jesuit Post, an online publication staffed and written by younger Jesuit Catholic priests still in their vocational formation, has millennials in particular set in his sights.

“We want to help people see that faith isn’t something reserved for Mass on Sundays, but a lens that filters the way that we approach the world,” says Strassburger.

And how do you share that lens with a wider, younger audience? If millennials are skipping Sunday morning service to stay in bed, then try to pop up on their phone while they are laying there swiping through it.

The Jesuit Post has experimented with different multimedia content, like their weekly “One Minute Homily” video series – each video now typically gets thousands of weekly views. They have greatly expanded their use of Instagram, and are celebrating their recent milestone of getting their 10,000th follower, granting them the famous “swipe-up” privilege.


Gunty and the Catholic Review team see the need to keep following the trends, as well. Metrics analysis has helped them determine that their primary audiences change in age across different platforms, allowing them to target specific groups with the stories they think they are most likely to read.

They aren’t afraid to turn to outside help, either. The Catholic Review is part of both the Catholic Press Association of the United States and Canada and the Associated Church Press, but also the Maryland, Delaware, and DC Press Association, an organization of mostly secular publications.

“Part of it is being open,” says Gunty. He and his team do not hesitate to reach out to their peers at other, more mainstream publications to get a sense of what’s working for them and maybe even some ideas for new things to try.

This past September, Crux reported on a recent Pew Research Center study that found that about 65% of people in the United States believe that religious leaders occasionally act unethically. The percentages for military leaders, journalists, and police officers were significantly lower.

However, the same report goes on to show that levels of trust in religious leaders generally go up for people that regularly attend religious services.

So, maybe the hope for the Church and Catholic publications lies in finding ways to get people to pay attention to that ‘Good News.’ Gunty hopes that by continuing to offer their unique perspective on world issues and also highlighting the work of service-oriented Catholics, both magazine subscriptions and church attendance will go up.

“If our stories can inspire others to do some of the same kinds of things – works of service, works of mercy…that may be the thing that tells people, ‘huh, I’m looking for something bigger, I’m looking for community, these people have community,’” he says. “That example is what people of the millennial generation see and think, ‘hmm, maybe that’s something I’d like to have?’”

In 2018, the Saint Mary’s Press Catholic Research Group and the Center for Applied Research in the Apostolate at Georgetown University conducted a study focused on discovering the primary reasons why young people who decided to leave the Catholic Church ultimately left.

The report found that the reasons why young people leave the Church are often different from what older adults think they are. Many young people do actually believe in the teachings of Jesus, one of the pillars of the Catholic faith, but find Church doctrine pointless and hypocritical and believe they do not need the formalities of the religion to live a good, moral life.

So, as Church perspective and teaching starts popping up in the same places where people look at photos of friends, get new baking recipes, and buy shoes, are they more likely to engage with it? Or, will the content only really stick for the people that have already bought in, like the people who get the Catholic Review in their mailbox every month or search for the Jesuit Post on google? Further, will an increase in engagement with Catholic content have the ultimate effect of bringing more people in to the faith?

As time goes on, Gunty, Strassburger, and other Catholic journalists will just have to keep doing what they do best – report the ‘Good News’ – and hope to get some good news in return – that more and more readers are paying attention.